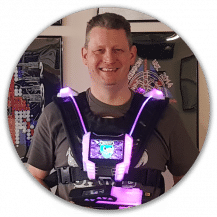 I first started playing laser tag when I was 17, back in 1988 and loved it. I still play every week, both at my 2 locations and traveling to other centers, both at home and when traveling. I have played at locations all over the UK, Europe and the USA. If I had to put a figure on it, I’ve probably played at over 300 different laser tag arenas over the years.

I own and operate the 2 largest standalone laser tag centers in the UK.

I bought my first location in April 2006, which was originally running LaserQuest equipment. I swapped out to Zone T1 in July 2006 and to Zone T2 Infusion in March 2007, finally swapping to Laserforce in 2016.

I opened my 2nd location in April 2010, using Zetablast hardware and swapped to Laserforce in 2018.

The reason for both swaps was the rising cost of maintenance of my existing kit and lack of support from the other manufacturers – which had actually ceased many years before. We had managed to keep the equipment going for so long, primarily due to our experience of fixing stuff ourselves.

More than just an operator of sites, I love laser tag – I have my own “laser tag museum”, where I personally own 11 different types of equipment and I was also instrumental in bringing the Armageddon laser tag tournament to the UK, back in 2006 – the tourney has ran every year since then (the framed T-Shirts in the picture are from the tournament and are on display in my Bradford location) – I have also played at the sister tournaments in both the US and Sweden, too.

Over the years I have designed and built a number of arenas, including our own (obviously), with a focus on making them fun to play, not just for the general public, but also for more serious/competitive level play.